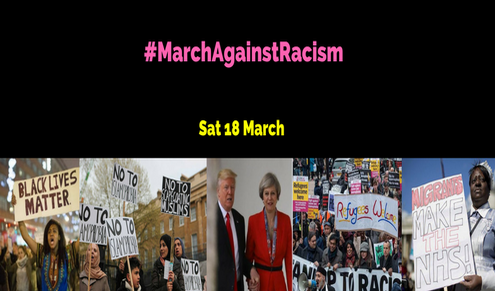 “There is a link between inflammatory statements by politicians and racist attacks and hate crimes on the street. There has been a rise in such crimes in Britain, following the EU referendum and a similar pattern has emerged in the US. Now is the time for people of goodwill to unite and stand up to racism.”
Diane Abbott

Amid a vitriolic atmosphere of anti-migrant hysteria following the EU referendum, Prime Minister Theresa May has announced she will trigger article 50 by the end of March 2017 in order to “have the freedom to choose the way we control immigration.”

In a situation where migrants, Muslim women and anyone considered to be ‘foreign’ are being attacked on a daily basis and refugees are being abandoned by Britain and Europe to destitution, drowning and exploitation, there has never been a more important time in recent history to stand up to racism.

Since Brexit and Trump’s election there has been a marked increase in racism, or at least these two events have given racists leave to openly display their hatred. Since last year racists have been emboldened as a result of these occurrences, particularly the US elections.  Unless we speak out, as a result of the hateful rhetoric and the actions of Donald Trump and others both in the USA and here in the UK there could well begin the normalisation of racism, sexism, homophobia, anti-immigrants, anti-Muslim, even anti-Semitism and hatred for refugees despite their obvious plight and the enormous suffering they have endured.

With the election of Donald Trump racists the world over now feel encouraged; their hatred, prejudice and bigotry inflamed, now sanctioned by the most powerful man in the world, the president of the US. Trump used people’s prejudices and hatred to secure his election victory inciting hatred towards Mexicans, black people, immigrants and Muslims.

The aftermath of the UK’s EU referendum has also resulted in a sharp rise in racism including hate crimes ranging from verbal abuse to violent attacks. Such attacks have focused on Polish immigrants and Muslims, one pregnant Islamic woman lost her baby as a result of one such attack  and many Polish people have been the focus of racist motivated abuse and violence.

In both cases the flames of racism have been fanned by politicians. In the USA immigrants have been used as scapegoats. Trump’s campaign rhetoric portrays a country under siege from refugees and immigrants, particularly Mexicans and Muslims.  To stir hatred he slanders Mexicans as “rapists” and “murderers,” threatening to build a wall and imposes the Muslim ban. The conservative government has used a similar tactic to distract from the financial crisis and their failing economic policies blaming immigrants and refugees for many of the ills that have befallen this country as a result of the Tory policies of Austerity. Encouraged and baited by the government and the media many people now blame immigrants for the shortage of housing, long NHS waiting lists and job shortages to name just a few of the many grievances for which immigrants have been scapegoated. I consider that many people voted to leave the EU simply as a result of their zenophobic/racist attitudes. The UK was once a more tolerant society who stood up for the underdog, we had a reputation for lack of racism and other prejudice. Sadly so much has changed. I like our multicultural society, the presence of other cultures enriches our own. We are, after all said and done, one species, one race, the human race.

Please attend the March on the 18th March we must never allow the current climate of racism and other prejudices to become acceptable.

“Pit race against race, religion against religion, prejudice against prejudice. Divide and conquer! We must not let that happen here.”
Eleanor Roosevelt

“Men build too many walls and not enough bridges.”
Joseph Fort Newton

“Forty-two years after Dr. King was murdered, we are still a nation of inequality. People of color, women, gays, lesbians, and others are still treated as second-class citizens. Yes, things have changed but we have still not achieved equality among all humans. And nonhuman animals continue to be chattel property without any inherent value.”
Gary L. Francione

We all have no choice but to do better.

The world is in turmoil, the rise of right-wing political agendas, bigotry, rampant racism,  anti-Muslim, anti-Semitism
ant-migrants, anti-refugees, homophobia, sexism … I have I missed anything, it seems that everyone hates everyone else. It has to stop, we need one world, one race, the human race.

Keep in mind it is not only over in the USA and here in the UK but also in the rest of Europe that we need to be concerned about the rise in racism and other prejudices.

It’s not just Trump’s US. Anti-Muslim hate threatens Europe too

The Islamophobic ideologues at the heart of the new US administration have allies on this side of the Atlantic. We must all fight the spread of their divisive lies
https://www.theguardian.com/commentisfree/2017/feb/02/trump-us-anti-muslim-hate-europe

8 Surprising Facts About Migration the Tabloids Don’t Want You to Know
https://www.globalcitizen.org/en/content/facts-migration-immigration-impact-uk-tabloids/

2 thoughts on “Join March Against Racism”