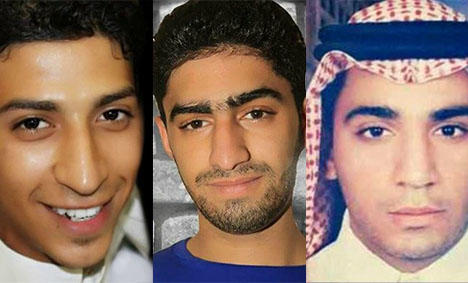 Please act now to prevent the execution of 14 men in Saudi Arabia.
All that stands between these 14 men and their death is King Salman’s signature. Please click the link below for more information and to email Saudi Arabia.  Join Amnesty International in urging the Saudi authorities to stop the executions now.

If you do not have the time to read further please at least click the above link and take action.Please send only a polite message.

“On 1 June 2016, the Specialized Criminal Court (SCC) in Riyadh sentenced 14 men to death by beheading. They are:

The men were accused of spying for Iran. They endured a grossly unfair mass trial based on ‘confessions’ they told the court were obtained under torture. They were eventually charged with a series of offences including ‘high treason’ with some facing several other charges which are not recognised criminal offences under international law, such as ‘supporting protests’ and ‘spreading the Shi’a faith’.

Put simply, they are victims of the Saudi commitment to use the death penalty as a weapon to crush dissent and neutralise political opponents.”

Please click the link below to read more and send an email to Saudi Arabia.

STOP 14 MEN BEING EXECUTED IN SAUDI ARABIA
https://www.amnesty.org.uk/actions/stop-14-men-being-executed-saudi-arabia#.WmWjiU2XdxM.twitter     –   After clicking and sending the message you will need to scroll down for more information. Please send only a polite message.

There should be no place in the modern world for the legal execution of anyone, but most particularly in cases such as the above. I find executions extremely disturbing, no one should have the right to take the life of another person for any reason, the fact that there are nations in the modern world that continue to punish people in this way is shocking.

Unfortunately this form of punishment is widespread.

Below you find out which countries execute the most people:

Surprisingly the USA is listed 5th of the countries with the most executions. 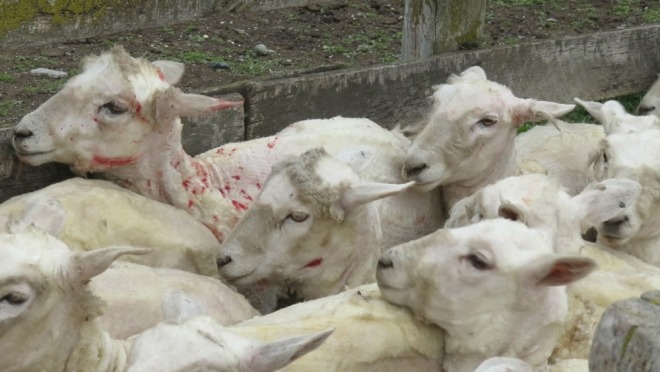 The exciting news right now is that Norway are Banning Fur Farming!

Norway has 300 fur farms, which breed and kill approximately 700,000 minks and 110,000 foxes every year, so this is a significant progress for the rights of animals not to be exploited abused and killed simply for fashion or to produce garments which are no longer necessary in modern times when there are so many synthetic cruelty free alternatives.

We need also to turn our attention to the plight of sheep, who for many people seem less obvious victims of abuse concerning their exploitation for wool, yet another product that is not necessary and like fur involves horrific abuse

Please take action and help prevent animal cruelty in the wool industry as sheep are abused and killed for their wool.

Please help to save defencess sheep from this shocking brutality by sending a message to Urge Express and Forever 21 to drop wool in favour of animal-friendly materials.

Learn More – other action to take further down.

Warning the video is extremely disturbing.

This latest exposé shows more of the same—sheep shearers in Australia violently punched these gentle animals in the face and beat and jabbed them in the head with sharp metal shears. The attacks often left the petrified sheep bleeding from the eyes, nose, and mouth.

After PETA exposed rampant extreme cruelty to sheep across Australia in 2014, the video evidence resulted in landmark cruelty convictions against shearers, and the wool industry assured the public that such abuse would no longer be tolerated. But as this exposé shows, absolutely nothing has changed for sheep, and the cruelty is as severe as ever.”

Please continue reading and send  a message to Urge Express and Forever 21 to drop wool in favour of animal-friendly materials. Click the Take Action button to send the message which you can edit using your own words if you can do so, if not please send it as it is.

You can also help sheep by refusing to buy wool.

Leave wool and other clothing derived from animals such as mohair and fur out of your wardrobe. There are humane modern fabrics such as cotton, rayon, acrylic, hemp and nylon. Modern synthetic fibres are more versatile, warmer, easy to care for and most importantly humane.

I have a fondness for timid gentle sheep whom I often see grazing in the countryside close to where I live, out in all weathers often suffering injuries, neglected, open to the elements, predators and all manner of hazards. Sheep suffer like all farm animals for products we do not need, namely meat and wool.

Please help sheep by changing to a vegan lifestyle and keep wool out of your wardrobe and meat off your plate.

Read more about the brutality of the wool industry

“Sheep are gentle individuals who, like all animals, feel pain, fear, and loneliness. But because there’s a market for their fleece and skins, they’re treated as nothing more than wool-producing machines.

If they were left alone and not genetically manipulated, sheep would grow just enough wool to protect themselves from temperature extremes. The fleece provides them with effective insulation against both cold and heat.”

Though the next article was written back in 2014  the brutality continues, nothing has changed for sheep exploited by the wool industry.

A wool jumper is just as cruel as a mink coat

A Peta film shows workers who beat, kick, stamp on, throw, mutilate and even kill sheep as they shear them

“The investigators saw shearers violently punch struggling sheep, and beat and jab them in the face with sharp shears, leaving the gentle animals bleeding from their eyes, nose and mouth. One shearer repeatedly twisted and bent a sheep’s neck, finally breaking it.”

“Most shearers are paid by volume, not by the hour, which means that they have an incentive to work as quickly as they can, with little regard for the sheep’s welfare. Investigators recorded shearers who processed up to 27 sheep per hour and up to 35 lambs. Such fast and often violent work can lead to severe cuts on sheep’s abdomens, hindquarters and limbs – even on sheep’s penises. Large swaths of skin were also cut or ripped off the bodies of many sheep by the shearers.

More and more people are changing to a vegan diet.

There is now much more help available for you to make this change in your eating habits, a change which not only helps the billions of animals who suffer from cruelty and abuse but also helps protect our environment and your health.

Here are suggestions to help you make the change if you are not already vegan and if you are the following links will help add variety to your diet and make life easier.

Good news for vegans and potential vegans as Tessco introduce new range of 18 all-vegan meals at 600 of their stores under the Wicked Kitchen brand.
http://www.onegreenplanet.org/news/tesco-launches-vegan-meals/?utm_source=Green+Monster+Mailing+List&utm_campaign=c75a3eb43a-NEWSLETTER_EMAIL_CAMPAIGN&utm_medium=email&utm_term=0_bbf62ddf34-c75a3eb43a-107260621

Veganism is on the raise,  great news for animals and the environment and our own health, a win win situation all round.

There is less and less excuse to do the right thing and change to a vegan diet.

Go Vegan for the sake of the 56 billion animals slaughtered each year  – some estimates have a higher figure of 70 billion , the environment – meat and dairy  contributes to global warming, widespread pollution, deforestation, land degradation, water scarcity and species extinction – and your health  –57 Health Benefits of Going Vegan

Often we feel so powerless to change the world, the onslaught of injustice to both human and nonhuman animals seems relentless overwhelming, however there is one simple thing you can do: Change your diet and go vegan.

If you need encouragement why not take the pledge:

Sign up via email using the form in this link  “and for 30 days you’ll receive advice on all aspects of a vegan diet (including lots of healthy and easy recipes to try out), allowing you to really sink your teeth into the lifestyle.”

Related links with advice and information concerning a vegan diet

5 WAYS A VEGAN DIET HELPS TO SAVE NON-FARMED ANIMALS
https://www.livekindly.co/veganism-saves-animals/

How to Go Vegan – advice from the Vegan Society
https://www.vegansociety.com/go-vegan/how-go-vegan

FREE daily emails
with everything you need
to go vegan