This May 20, 2016 was an historic day for the animals and the activism for their rights worldwide.

THE ZOO OF PAYSANDÚ, IN THE CAPITAL OF PAYSANDÚ DEPARTMENT IN WESTERN URUGUAY, WAS CLOSED DOWN FOR GOOD.

The commemorative plaque, made with the cage’s door of the late zoo, says:

The Zoo of Paysandú was located in this site until May 20, 2016, date in that it has been transformed into the Botanical Garden “Paris London”. 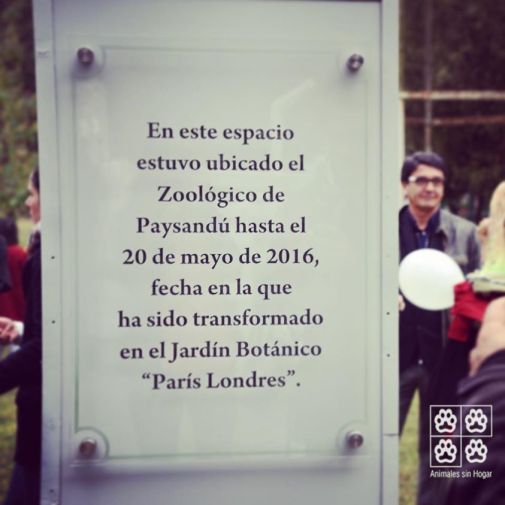 Uruguayan children from public schools release doves who were also prisoners of the late zoo.

THANK YOU VERY MUCH TO ALL THE ANIMAL RIGHTS ACTIVISM.

The Uruguayan non-governmental organization, SOS RESCATE DEFAUNA MARINA (SOS RESCUE OF MARINE FAUNA), not only rescues marine animals in order to return them to the sea, in most of cases after they were healed and fed, but educates society in the respect and care of nature.

Surely, animal rights activists will always remember the images of Danish children witnessing public dissections of “surplus” animals in Denmark zoos. The aim, according to the authorities of those zoos, is teaching children that the “Real World” is not the “Disney World” wherein no person or animal ever dies. The “Real World” is a place, Danish authorities affirm, where slaughtering animals for entertainment is legitimate because they are inferior creatures with no right to life, and the humans are their proprietors because of their intellectual superiority.

This photo shows Uruguayan children watching a baby dolphin recently rescued by SOS RESCATE DE FAUNA MARINA. The dolphin, a boy with less than ten days old, was found in the coast of Neptunia, in Canelones, the capital of the department of Canelones in Uruguay, with part of his umbilical cord. He has respiratory problems and his situation “is complicated”, according to the organization’s authorities.

Please watch the video included in this link.

Update
The baby dolphin rescued by the Uruguayan non-governmental organization, SOS RESCATE DE FAUNA MARINA (SOS RESCUE OF MARINE FAUNA), has died on Tuesday, according to RICHARD TESORE, director of the organization. The animal had fishing nets marks on the body and respiratory problems.

The word “chocho” has at least four definitions in Spanish language. One of them is “candy”. Chocho is also the name of this beautiful Uruguayan puppy who was born with no eyes, and is as sweet as a candy.

Chocho is not a handicapped animal because he has already demonstrated he is able to love, and only the creatures who are unable to love should be considered “the handicapped”.

The handicapped are the humans. Never the animals.

The extraordinary Uruguayan animal organization ANIMALES SIN HOGAR has rescued, healed, and is sheltering and feeding, hundreds of animals.

They have also, with the wonderful support of the American sanctuary THE WILD ANIMAL SANCTUARY, sent two lionesses and one lion from Uruguayan zoos to that sanctuary in past year. One bear, one lion and two tigers will be sent in next months too.

STARVING MOM DOG AND HER CHILDREN ARE RESCUED

ANIMALES SIN HOGAR, as most of animal organizations all over the world, survives with only small donations from animal rights activists and some lowly private companies.

THE HAPPY KINGDOM OF DENMARK AND THE UNHAPPY REPUBLIC OF URUGUAY

DENMARK (THE KINGDOM OF DENMARK) brags about being a country with high standard of living and ranking highly in education, health care, and human rights. Even though its weather can be dreary and most of days are dark in winter, the Danish people don’t give up and consider themselves to be one of the world’s happiest (according to the United Nation’s World Happiness Report, Denmark came in third in the 2015 following closely behind Switzerland and Iceland). Many of these happy Danish people are even happier when they go to the Danish zoos to watch public dissections of animals, because the happy Danish zoos will slaughter their animals if they became “surplus” and, also, they will dissect them in public for the sake of education of the happy Danish adults and children, they will claim―and in order to defy animal rights activists, they won’t ever claim. What a happy country!

On the contrary, URUGUAY (EASTERN REPUBLIC OF URUGUAY) is not a happy country (came 32 in the United Nation’s World Happiness Report 2015) in spite of being regarded as one of the most liberal nations and socially developed in the world. As in Denmark, the Uruguayan education system provides free of charge access to public primary school, secondary school and higher education, and has a universal health care system financed through taxes. Same-sex marriage and abortion are, as in Denmark, also legal in Uruguay. While BESTIALITY was legal in Denmark up until recently (in Denmark, sex with an animal had previously been allowed as long as the animal wasn’t harmed, which was hard to prove), it never was in Uruguay. Even The Economist named Uruguay “country of the year” in 2013 due to its worldwide innovative policy of legalizing the production, sale and consumption of cannabis.

As opposed to the happy Danish people, many of the unhappy Uruguayan people are even unhappier when they visit the Uruguayan zoos. Therefore, since some years ago, the unhappy Uruguayan zoos are getting rid of their exotic animals. Will they slaughter their “surplus” animals as the happy Danish zoos do every year? No, they are sending them to the American THE WILD ANIMAL SANCTUARY. The Uruguayan animal rights association ANIMALES SIN HOGAR, with the support of the The Wild Animal Sanctuary, has already sent two lionesses and one lion to the sanctuary. One bear, one lion and two tigers will also be sent in next months. “Why are these South American savages sending those great animals to a sanctuary instead of killing them and then doing a beautiful dissection?,” the happy Danish people ask. What an unhappy country!

LIONESS LUNA FROM AN URUGUAYAN ZOO TO THE AMERICAN SANCTUARY

LION SOL FROM AN URUGUAYAN ZOO TO THE AMERICAN SANCTUARY

LIONESS JULIETA FROM AN URUGUAYAN ZOO TO THE AMERICAN SANCTUARY

LION IN URUGUAYAN ZOO TO BE SENT TO THE AMERICAN SANCTUARY

CHILDREN GASP IN SHOCK (AND HOLD THEIR NOSES!) AS LION’S INTESTINES ARE REMOVED DURING CONTROVERSIAL PUBLIC DISSECTION AT DANISH ZOO
http://www.dailymail.co.uk/news/article-3273839/Is-public-dissection-lion-Danish-zoo-gruesome-educational-Decide-live-feed-event.html

Eva, a 17-year-old bear, is condemned to suffer a cruel and slow death in a prison of the Uruguayan zoo of Salto, in Salto city.

A group of Salta citizens, supported by people from different parts of the country fighting for the same cause, has started a movement that aims to relieve a local municipal zoo bear living alone after the death of his mother.

Eva, as she is called, was born in captivity 17 years ago and lately she looks very sad and deteriorated …

Spends most of the day resting his head against a fence no matter what happens around him..

Read More:
The above is a Google translation from the following:
http://www.elpais.com.uy/informacion/piden-libertad-osa-eva-zoologico.html  In Spanish, but can be translated if you use Google or other translator.

The translation is not too good, basically this poor bear is all lone after his mother died, he is depressed and lonely and needs to be with other bears in a sanctuary.

Please write to Salto’s mayor, German Coutinho, and ask him to be compassionate with Eva by sending her to a sanctuary.

I am not responsible for any of the advertising that may appear on this blog.